I would imagine that Batman would even think his life is boring. It depends on what you get used to. Live at a certain level of action and it would become ordinary. Then you would think there is nothing interesting or exceptional that would interest others.  I try to convince men and women I know, whose work and their results have been extraordinary, to write about it—others would love it, be inspired and motivated by it, how else can they judge themselves?

Having lived the life of a courtroom lawyer for 43 years, I have stories to tell, and I have written many in the form of short stories.  Growing long in the tooth, even I am growing nervous about not having completed them all. I wish my ancestors, great grandpa John Sledge, who served in the Civil War, and his son, my grandpa, Dr. Chester Sledge, who worked as a logger to finance his dental school, and then practiced thirty years in a small southern country town, had written memoirs. They probably thought their lives were boring. Anything but boring.

How about these three lawyers?  In the turn of the century, smoking was allowed in the courtroom.   You would do anything to distract the jury. The famous Clarence Darrow, who defended the famous Scopes “Monkey Trial” against Williams Jennings Bryan, on evolution would run a wire into a cigar and would smoke while his opponent was making argument. The ash would grow and grow, and never fall off. The jury would pay more attention to the ash than to the other lawyer. Do you think he had stories to tell?  You bet. And books were written about him and his famous trials and sayings:  “Just think of the tragedy of teaching children not to doubt.”

During my time, Joe Keogh, who later became District Judge and wore a green robe (some called him “His Irishness” because of his predisposition to burst into a recitation of Irish poetry and his liking of the amber liquids of Erin, and fair Colleens.) One leg was somewhat shorter than the other, resulting in his having a pronounced limp. He was assistant counsel defending a case against the formidable Alva Brumfield, legendary plaintiff lawyer, who had the identical problem with his leg.  During trials, while the opposition was making closing argument, Alva would pace the back of the courtroom, distracting the jury.  While Joe’s senior partner was making argument, Alva began is old distraction device. So Joe, to emphasize Alva’s silly trick, began to pace right behind him, limp step, limp step in perfect time with Alva. Yes, it distracted the jury, and finally Alva yelled to the judge to make “that boy stop walking behind me.” That only made Alva look sillier, and he lost the case. Do you think Joe or Alva would have stories to tell? I guarantee! Write your book now.

Some legendary lawyers realized that the courtroom could be a stage, and they were performers.  One is described in a little book by John Mortimer, Clinging to the Wreckage, who wrote those hilarious stories about his made up character, British Barrister Horace Rumpole and his cases before English juries. He tells of criminal defender, Sir Edward Marshall Hall, who once said to a Jury, pointing to his trembling client in the dock, a young prostitute accused of murder, ‘God never gave her a chance. Will you?’ 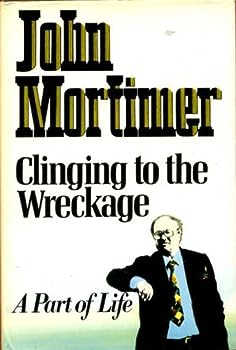 Cover of Clinging to the Wreckage

He goes on to describe Hall’s dramatic entry into a courtroom.  His head clerk would come in carrying the brief and a pile of white linen handkerchiefs, then came a second clerk with a water carafe and an air-cushion (lawyers were subject to piles). Sir Edward himself would then burst through the swing-doors to be installed in his place by a flurry of solicitors and learned juniors. He would subside on to the inflated rubber circle and listen to the case of the prosecution. If evidence was against Hall’s client he would slowly unfold the top handkerchief and blow, a clarion call to battle. When the situation became desperate he would remove the air-cushion and re-inflate it, a process which always commanded the Jury’s undivided attention. Do you think that man had stories to tell? You bet? Write your book now.

Do you have a story to tell, an image to enhance?  Think about your life, the things you have experienced and seen, and about the things that you can do. Write about it. I would read it, and so would thousands of others who would love to share your life with you. Write your book now.

About the Author: LD Sledge